It’s something that happens every day in the Occupied Territories, so why am I writing about it? Because of a random tweet, because it was written up in the Israeli newspaper, Haaretz, because the reason it caught my eye was that this article was about newborn kids—the four-legged variety.


My first thought was: How sad is that? The arrest and incarceration of children has become so commonplace that it no longer attracts attention. The abduction of baby goats is more noteworthy than the abduction of a child.


“Two and half hours after the kids were born a group of soldiers, probably serving at the Nahal base at Krayot ‏(not in the West Bank‏), showed up and confiscated the goat and two newborn kids, loading them on their Hummer. Mahamra’s donkey, which had been harnessed to a water container on wheels, disappeared too.” http://www.haaretz.com/news/middle-east/the-idf-battles-a-palestinian-shepherd-and-his-two-baby-goats.premium-1.507009


My second thought was: In some ways, taking three goats and a donkey from this man may have even more disastrous results than arresting a child. It could very well threaten the livelihood of the entire family. The donkey may be their only transportation; their only means of getting fresh water, getting to the nearest town to sell their livestock or buy basic necessities. Sell their livestock? Without the mother goat and kids, there will be far less livestock to sell, no milk, no cheese. The shepherd is from the village of Maghayir al-Abeed in the South Hebron Hills. He raises his goats on the same land his father did, and probably his father before him for generations.


How did such a story even get into Haaretz? The article states that several nudniks (I looked it up—nudnik is a Yiddish word meaning persistent pest) took up the case. They put it up on Facebook and started investigating the abduction of the animals. Others read about it on Facebook and began to call and add their voices.


They were told the shepherd entered a closed firing zone with the intention of stealing ammunition. The kids were less than three hours old—not exactly ideal get-away vehicles for an ammunition thief. Also, the land is NOT a closed firing zone. The IDF wants to demolish eight of the twelve villages that are on 30,000 dunums of land (about 7,500 acres) to make it a firing zone. Israel’s High Court is debating the issue and has ruled that the status quo cannot be changed until they make a final ruling. Looks like the IDF (Israeli Defense Force) is getting a head start. 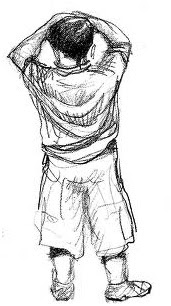 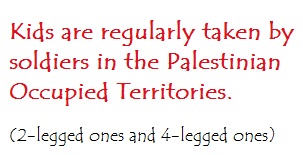 I usually embed a video at the end of my blog post. The one I wanted to share with you does not allow me to embed it.  Here is the link:
https://www.youtube.com/watch?v=wpPMyQz759k&list=PLA21794A5EF380C4A

Posted by Dixiane Hallaj at 7:47 PM