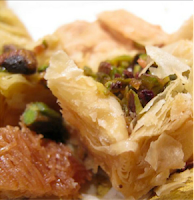 Eid al-Fitr, or the Feast of Breaking the Fast, is the holiday marking the end of the month of Ramadan. For children the Eid is a time of magic. Schools are closed, there is visiting and merriment everywhere. Coins flow from the adults and they are free to spend them on sweets. It is a time of new clothes, carnivals, presents, and sweets that boggle the imagination.
During Ramadan, Muslims fast from sunup to sundown. That means no eating, no drinking, no smoking, and even no makeup for women (lipstick might get licked and ingested, eye makeup might get into the eye, etc.). To help people along in the fast, they often get up in the wee hours of the morning and have a meal, call the sahoor.
Ramadan is a time to develop self-control and to think about how to become a better person. Lying, arguing, gossiping, and other sins of all types should be avoided. Charitable giving and prayer are encouraged. It is a time to think of others and to be thankful for the blessings of God.
That being said, when you spend hours on end without food or drink, your thoughts stray to food and drink more often than they might otherwise. The evening meals are always more elaborate and more delicious than any other time of year, the desserts are amazing, and everyone feels the excitement and anticipation of the call announcing the end of the day’s fast.

In winter Ramadan is a lot of fun—especially for youngsters who get up at unusual hours to eat, even if they don’t fast the next day. The days are short and the meal at the end of the day is especially welcome after a long fast.
In summer, it’s an entirely different story. The days are unbearably long, and in many places unbearably hot without water. Traffic jams become noisy masses of frayed nerves as hunger, thirst, and lack of nicotine turn cab drivers into demons of speed and impatience.
All the problems of fasting in the summer have been exacerbated in modern times for many Muslims who find themselves far from Mecca or Medina. Now there are Muslims scattered across the globe, including places above the Arctic Circle. Consider the dilemma of people fasting in Scandinavian countries, where the daylight can last 21 hours or more. Fasting in the land of the midnight sun? How is that possible?
There are two ways it can be done. One is to fast by local time, which leads to fatigue and may have long lasting effects on the health. The alternative is to follow Mecca time or the nearest Muslim country time. Dr. Abdul Mannan, an Imam and president of the Islam Society of Northern Finland, quotes Egyptian scholars who say “if the days are long - more than 18 hours - then you can follow the Mecca time or Medina time, or the nearest Muslim country time." http://www.bbc.co.uk/news/magazine-19199411
Why is Ramadan in the summer sometimes and in the winter other times? Because the Islamic calendar runs on the lunar year, which is only 354 days long. Since we normally use the solar calendar, Eid appears to be eleven days earlier each year.
Traditionally, the end of the lunar month was determined when the new moon was sighted, witnessed by a Muslim known to be truthful and trustworthy. Today, modern astronomy can accurately predict the appearance of the new moon years in advance. There is no more guessing about whether the Eid will be tomorrow or the next day—we can even tell what day it wall fall on next year, or ten years from now.
The twenty-first century has intruded on Ramadan in other ways, too. In the past, believers who were not within hearing distance of a mosque could end their fast when they could no longer tell a white thread from a black thread. Today modern astronomy can tell us exactly when the sun will rise or set. Smartphones have apps that tell you when to begin the fast and when to end the fast. Apps like iPray, iQuran, and Find Mecca, an app that tells which way to face for prayer, have changed the face of Ramadan. http://www.huffingtonpost.com/nidhal-guessoum/ramadan-modern-technologi_b_917031.html

We hope nothing ever changes the message that we should always do our best to be good members of the family of man and good citizens of the world.
Posted by Dixiane Hallaj at 10:47 AM