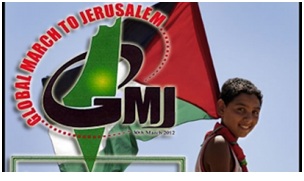 Every year on March 30, Palestinians celebrate Land Day, and this year people from all over the world are planning to join the Global March to Jerusalem, although most of them will be doing so in spirit only.  (Read more at http://gm2j.com/main/ )

This sentence may raise a few questions for those not familiar with the Palestinian problem, such as:  What is Land Day? Is the march really global? Why are most people only marching to Jerusalem in spirit?

What is Land Day?  In 1976 Arab citizens of Israel started Land Day to protest Israel’s plan to expropriate thousands of dunums (1000 square meters) of their land.
Although most people are aware of the fact that Israel confiscates land in the Occupied Territories for their settlement program, few realize that they also take land from Israeli citizens, who just happen to be non-Jews.  Six Palestinians were shot during the first Land Day protests, and the concept of Land Day spread as a day for people to express their support of Palestine.  Land Day, more than any other single event, united the Palestinians within the state of Israel with the Palestinians in the camps and in the Palestinian Diaspora, which now spreads throughout the world.
Is the march really global?  Marches are planned in Israel, Occupied Palestine, Egypt, Lebanon, Jordan and Syria, as well as locations all over the world.  Archbishop Desmond Tutu of South Africa and the Irish Mairead Maguire, both Nobel Prize winners, will participate.  There are many organizations in the United States and Canada that are planning solidarity actions.  If you live in North America, you can find information at http://www.gmj-na.org/localactions.html to find the city nearest you.
So why are so many of the marchers never going to make it to Jerusalem?
Because the organizers of the march have announced that they will not confront Israeli forces.  “We are after all not an army, but popular peaceful international forces aiming to show solidarity with Palestine and with Jerusalem,” said spokesman Zahir Al-Birawi.

ASIAN Caravan – On March 22, 2012 almost 130 members of Asian caravan to Jerusalem crossed the border between Iran and Turkey.  They will proceed to Istanbul and sail to Lebanon to join the global march there.  A simple Google search yields postings from India, Indonesia, Pakistan, Iran, Turkey, the Philippines, Bangladesh, and many other countries.
LEBANON:  Participants from Lebanon will march from Palestinian refugee camps toward Beaufort Castle, the Crusader fortress that served as a military base of operations for Israeli troops during Israel’s occupation of south Lebanon.  They will not approach the border.  Last May when Palestinians approached the barbed wire near the border town of Maroun al-Ras, 10 Palestinians were killed, and 112 others wounded.  (http://www.dailystar.com.lb/News/Politics/2012/Mar-23/167729-land-day-march-rerouted-will-not-reach-border-with-israel.ashx#axzz1pyvzKrRG )


EGYPT and SYRIA: Marchers will not leave their countries, but they will not forget Jerusalem on this day.
WE WILL NOT FORGET
A search of YouTube shows many calls for action.
These are two that I liked.