I thought it was a great near-spring day...

The sun was shining, the daffodils were beginning to bloom, and my local bookstore sent me an email saying that they had sold out all their copies of my novel, Born a Refugee.  What more could a writer want?
And then I looked at the internet to see what was happening.  I didn’t find anything in the major news sources, but following a link from Twitter I found that this was one of the most violent days in Gaza in nearly a year.  Israeli aircraft killed 14 militants—some of them too torn up to be wrapped in cloth, as Muslim tradition dictates.   This picture was taken from the Connecticut Post website ctpost.com. 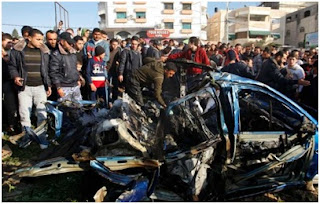 The Gaza Strip is only 139 square miles.  This is roughly twice the area of Washington, DC (and much smaller than the DC metro area) and just over one third the area of New York City (again, only the city--not the NYC metropolitan area).  Within this very small area lives a population of 1.7 million people according to an official report by the interior ministry in Gaza Strip, making it one of the most densely populated places in the world.
Over half a million of those people live in the 8 overcrowded refugee camps overseen by the United Nations Relief and Works Agency.  The over-all unemployment rate is estimated at 40%.  We talk a lot about unemployment in this country and how to lower the unemployment rate.  New business is always cited as one way to increase employment and areas of high unemployment try to attract new businesses.  How do you attract new business to an area where there is constant violence and air strikes can happen any time?  How do you build a place to employ people when the blockade does not allow the import of construction materials--not even materials to rebuild damage caused by the air strikes?  All Gaza has is an abundance of labor.
The on-going blockade only makes the news when attempts to get supplies into Gaza from the outside world results in violence.  The relentless poverty and deprivation that result from the blockade never make the news.
As I was writing this blog post, I received another tweet—three more killed and a further 26 injured, five of whom are in serious condition. 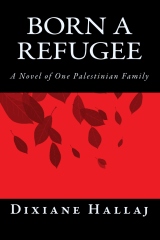 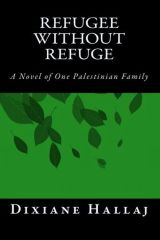 My books, Born a Refugee and Refugee Without Refuge, tell the story of one fictional family living with the constant poverty, overcrowding, violence, and oppression in the Kalandia Refugee Camp on the West Bank.  The conditions I write about do not begin to describe the conditions in Gaza.

Although the spring season seems to have arrived in my backyard, and the Arab Spring has given hope to millions throughout the Arab World, the people of Gaza have not yet been touched by the warmth of hope.
Posted by Dixiane Hallaj at 11:02 AM