Separate But Equal—never happened, never will

Back in the days of my youth (yes, I’m that old) bus stations in the southern part of the United States had four bathrooms and two water fountains.  Today my adult children look at me with puzzled expressions on their faces at the idea of segregation.  I might as well be telling them stories about dragons and sea monsters.  I like that. 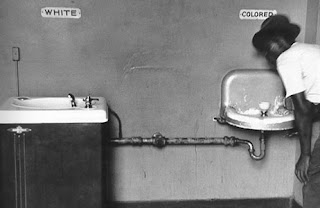 Yes, I know that racism is still rampant in this country, but now there are so many issues on which to discriminate that any halfway decent bigot can get up a good rant without breaking a sweat.  I’m not even sure race is at the top of the list any more.  Abortion, sexual preference, religion, political preference... the list goes on and on. 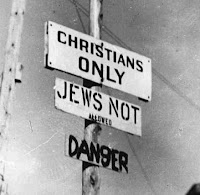 The point I’m trying to make here is that we have made progress in this country.  We’re far from perfect, but we’re working on it.  The "Christians Only" sign, posted in the United States, was not dated, although the blogger said that until the late 1960's Jews were still being discriminated against in many places in the southern United States.  http://attendingtheworld.wordpress.com/2008/10/12/blacks-chinese-japanese-blacks-jews-muslims-whos-next/

Racist groups, cults, fanatics, skinheads, etc. do exist in this country and in many other countries, but most people agree that it brings shame on the country and we must continually fight against it.  It is NOT legally sanctioned; it is NOT national policy.
Apartheid is alive and well and living in Israel.


Under current Israeli law, when an Arab Israeli marries a Palestinian they either live apart or must move to another country to live together long-term.


Various human rights groups challenged the law in the Supreme Court on the grounds that it violates the rights of Palestinian spouses to a proper family life.


But the court has ruled that human rights cannot override Israel's security concerns, with one judge writing that: "Human rights are not a prescription for national suicide."


Human rights groups have attacked the court decision, and accused the court of stamping its approval on a racist law that will harm the lives of families whose only sin is the Palestinian blood that runs in their veins.


"It is a dark day for the protection of human rights and for the Israeli Supreme Court," attorneys Dan Yakir and Oded Feller from the Association for Civil Rights in Israel (ACRI) said in a statement.   http://www.abc.net.au/news/2012-01-13/israeli-court-upholds-controversial-marriage-law/3770458

Reading about a law is very different from reading about an individual whose life has been changed by the law. A wonderful op-ed piece in the New York Timeshttp://www.nytimes.com/2012/05/24/opinion/not-all-israeli-citizens-are-equal.html?_r=1tells of a couple who are self-exiled to the United States—far from their respective families because the law prevents them from living in the husband’s home.


This makes me wonder what would happen (Heaven forbid!) if a non-Arab Israeli citizen married a non-Israeli Palestinian. Would the same law apply? Maybe one of my readers can find an answer.

Posted by Dixiane Hallaj at 7:53 AM