Gaza: Where the Arab Spring Turned to Winter 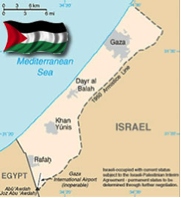 As I begin writing another novel about Palestine, it was suggested that I write about the Palestine of today, this minute—the Palestine with cell phones and Facebook.
Could I do that? Could I write about the Palestine of computers and cell phones without writing about the Palestine of hunger and constant fear? Could I do that without including the children traumatized by Operation Cast Lead and the smaller, unnamed operations that continue, unceasing, yet unremarked by the media?
According to the Gaza Community Health Programme, Operation Cast Lead affected approximately 95% of the people in Gaza, and an estimated 12% suffer from severe post-traumatic stress disorder.
The Arab Spring gave a flare of hope for Gaza. In spite of the Israeli blockade that was imposed in 2007, the economy revived in 2012. Hundreds of tunnels were built under the houses and olive groves of Gaza, stretching to Rafah and different strategic points in the Sinai. Goods of all sorts, including building supplies, clothing, computers, fuel, medicine—even Kentucky Fried Chicken, flowed through the tunnels. Men were employed rebuilding the homes destroyed by bombs. Engineers, truck drivers, shopkeepers, dressmakers, health care workers went back to work. Taxes on the goods imported through the tunnels paid the government employees. Teachers, clerks, ministers, sanitation workers were paid.
Then the Egyptian President Mursi was ousted, and the new Egyptian government began to destroy tunnels. Ceaseless and relentless, they destroyed or water-logged an estimated 90% of the tunnels, and Gaza was sealed at both ends. (Read more about this: http://gulfnews.com/opinions/columnists/gaza-between-the-rock-and-a-hard-place-1.1247751)

Gaza has a long coast line and has always relied on the sea for food and as a source of income. Since the beginning of the Israeli blockade, many Gaza fishermen have avoided the guns of the Israeli naval forces by fishing in Egyptian waters. This , too, stopped suddenly and without warning when Gaza fishing boats were fired upon by Egyptian forces. The video below gives more details. Gaza is now the world’s largest prison.
Can I write about this? Even when I write about Palestinian refugees, I need to have stories that end well. I like happy endings. Can I find a happy ending in Gaza?
Maybe not today, but I know where I would begin looking for a happy ending--the Gaza Community Mental Health Programme under the able direction of Dr. Eyad Sarraj. The doctors and staff work tirelessly to help alleviate the suffering and depression that invades the population a conditions grow steadily worse. Perhaps that is my happy ending--not an ending but a beginning, a place to find hope.
You can help these efforts by donating today: http://www.gazamentalhealth.org The Gaza Mental Health Foundation is a US charity that is run entirely by volunteers and all donations go to the Gaza Community Mental Health Programme.

Posted by Dixiane Hallaj at 9:02 AM