Some things never change—but they should

Many Palestinians have lived in refugee camps their entire lives.  In 1948 many families fled their homes to escape the violence that preceded and followed the establishment of the state of Israel expecting to be back home in a few weeks.
In December 1949, the United Nations Relief and Works Agency was established to aid Palestinian refugees, and it began operations in May 1950.  http://www.unrwa.org 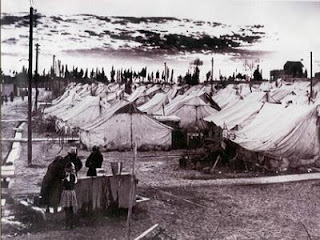 ﻿      The U N, like the refugees, envisioned the Agency as a temporary organization—over 60 years ago.

One of the first problems that surfaced was that of adequate water and sanitation facilities.  The victims of their lack of success were mainly the very young.  It becomes increasingly difficult to control diseases such as gastro-enteritis under these conditions, with disastrous consequences.  (I wove these conditions into the story in my novel, Born a Refugee, to explain the age difference between the oldest brother and his younger brothers.)


In 1967 Israel took control of yet more Palestinian land, creating another wave of refugees and putting many of the existing camps under military occupation.  The new refugees, many of them fleeing for a second time, were faced with many of the same hardships.  Again, the very young are the most likely victims. 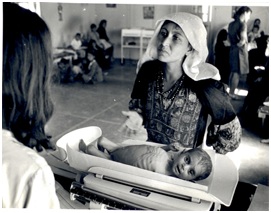 This photo, taken in the summer of 1971 in a Norwegian clinic in Baqa’a Camp in East Jordan, was distributed to news sources along with the story behind it.  The story emphasized that the woman was a good mother, “yet despite her good care her daughter, Maysoun, suffered from dehydration resulting from gastro-enteritis.”  A note added, “see photo HJ/BAQA’A/54A showing Maysoun one year after she received her treatment in the rehydration/nutrition centre.”  Although I was unable to find the referenced photo, I felt reassured that this child had survived.
But 1948 was a long time ago, and even 1971 was a long time ago, but success continues to elude them.

In 2011 URNWA launched an Emergency Appeal called WASH (Water, Sanitation, And Hygiene).  Environmental health conditions in West Bank refugee camps - challenged by inadequate quantity and inappropriate quality of water and sanitation services, place a great threat on the health status of camp dwellers, leading to improper personal and community hygiene practices and placing the population under severe risk of waterborne diseases or epidemics outbreaks. Watery diarrhea as well as acute bloody diarrhea and viral hepatitis remain the major causes of morbidity among reportable infectious diseases in the refugee population of the West Bank.  Out of a total of 19 refugee camps in the West Bank, conditions are particularly problematic in the 9 camps affected by frequent military operations damaging or ruining water infrastructures.  http://www.unrwa.org/userfiles/2011051512133.pdf
The conditions in Gaza are even more desperate than on the West Bank.  The video below is in Arabic, but the pictures speak as clearly as the words.  The children, filmed in school, tell of dirty, salty water running sporadically from their taps.
The Middle East Children's Alliance relates that the effects of the numerous attacks on Gaza has devastated Gaza's water infrastructure, destroying an estimated 800 of Gaza's 2,000 wells, and causing extensive damage to Gaza's water and wastewater treatment facilities.
Since January 2009, the Gaza health ministry and the World Health Organization have issued drinking, seafood and swimming advisories.  The long siege of Gaza has meant an increasingly long waiting list of spare parts, pipes, and building materials. This directly affects Gaza’s ability to maintain its sanitation and water treatment facilities. Meanwhile limited fuel and electricity often shut the systems down altogether.
As a result of all these assaults, the water in Gaza is polluted with untreated sewage, agricultural chemicals, and it is brackish from seawater. Gaza’s water contains high levels of nitrates, chloride and fluoride, and other pollutants that cause significant health problems.  http://www.mecaforpeace.org/projects/maia-project