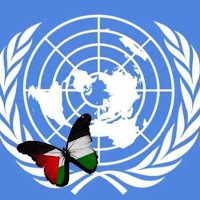 On November 29, 2012 Palestine asked to be admitted to the United Nations as the 194th nation.  In this age of self-determination, where nations go to war under the banner of making the world safe for democracy, Palestine continues to be denied independence.
In a vote that showed overwhelming support by the nations of the world.  Palestine was granted “non-member observer status.” It was an admission that Palestine is indeed a state.  (All pictures from: http://www.facebook.com/home.php#!/welcometopalestine) 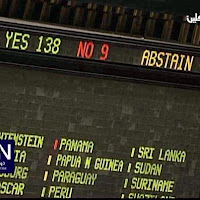 On the floor of the UN General Assembly, a Palestinian flag was unfurled as the vote showed on the electronic board.  Although this shot does not show it, there were 41 abstentions.  I watched as UN Web TV streamed the proceedings, and picked up a couple of quotes I’d like to share.


“Palestine is an open wound in the
conscience of the world.”
--Turkish Minister of Foreign Affairs


After the vote, the American ambassador to the UN said, “Tomorrow Palestinians will wake up and find that nothing has really changed.”  Almost true.  One of the intangible benefits is being able to stand just a little taller, knowing that most people in the world recognize the injustice that has been done to them.  Celebrations throughout the West Bank were more a sense of satisfaction, and they were even more subdued in Gaza, where thousands have not yet recovered from the latest violent attacks. 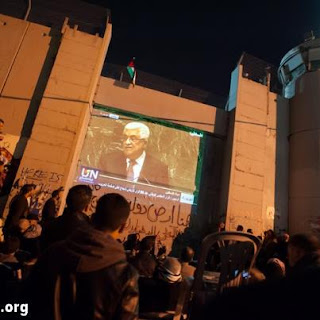 This photo by Ryan Rodrick Beiler/Activestills.org taken from The State of Palestine 194 facebook page, along with another picture showing a young man daring to scale the wall to plant the flag above the picture, shows a crowd in Bethlehem, watching the proceedings projected on the apartheid wall—right next to one of the watchtowers.  At least they found one use for the wall.  As one person commented, "In an honest world...this would be on the front page of every newspaper."
Speaking of the Apartheid Wall, several years ago the UN General Assembly, at the request of [non-state] Palestine, asked for an advisory opinion from the International Court of Justice concerning the Wall.  The Court condemned it, but it was only an advisory opinion.  Now that the United Nations recognizes Palestine as a state, it can bring suit in the International Court of Justice and the International Criminal Court.


Watch this space as more develops on this front.

Posted by Dixiane Hallaj at 9:52 AM