Descendents of refugees are included in the total population because they are still unable to realize their basic rights. About 20,000 Palestinians were internally displaced in the West Bank and Gaza Strip by 2001, some 3,000 of whom were newly displaced during that year. At least 26,000 Palestinians left the West Bank and Gaza Strip for Jordan and did not return between June 2000 and July 2001. Such transfer of the Palestinian population driven by hard econmic and discriminatory conditions continues today.
auphr.org/index.php/resources/factsheets/refugees/15-how-many-palestinian-refugees-are-there-today
The refugee camps began as tent cities in 1948. The inhabitants expected to be returning home in a matter of days or weeks. 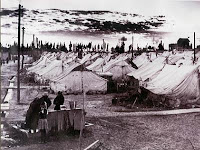 It has now been a matter of generations. In many places they are refused permission to work. In others, access to available work is restricted by checkpoints.
Political conditions and restrictions as well as  frequent outbreaks of violence conspire to keep the inhabitants from gathering the resources needed to move out of the camps.

(See http://www.unrwa.org for this and other photos of refugee camps and refugee life.)

My novel, Checkpoint Kalandia, shows the impact such a checkpoint can have on the everyday life of a refugee family.


Many of these families still rely on the generosity of others
to survive. In honor of World Refugee Day, please consider making a donation to help them.

Posted by Dixiane Hallaj at 8:17 PM