How many more must lose their lives, suffer severe injuries or unjust imprisonment, or lead lives of violence and despair before the world comes to the realization that in trying to find justice for the Jews of Europe, they created a much larger injustice for the Palestinians?

* In Jerusalem at least 2 injured, 5 detained at gates to the old city.  (The numbers are surely higher by the time your read this.) 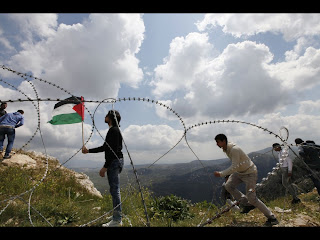 * Gaza – One dead, over 100 seriously injured, including a journalist at checkpoint between Gaza and Israel. 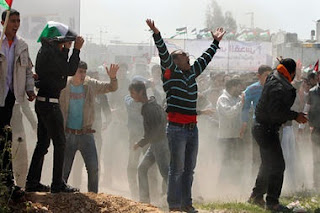 * Confrontations in Bethlehem.
* Syria – Land Day demonstrations scaled back due to ongoing violence.  Five killed today.
* Jordan – More than 15,000 people held a peaceful sit-in near the border with Israel.
As I follow events through live blogs my eyes cloud with tears of frustration and sorrow.
http://blogs.aljazeera.net/liveblog/Land-Day


The number of casualties continues to rise as I watch and read.


In my novel, Refugee Without Refuge, Kareema’s life was changed forever by the demonstration held in the Kalandia Refugee Camp on Land Day, March 30.  Today the story plays out in real life, as it has every year—in Kalandia, in Gaza, in places throughout the Arab World as Palestinians try to draw attention to the continuing encroachment of Israel on private Palestinian land within Israel as well as in the Occupied Territories.
In my novel young Imahn was shot by a rooftop sniper using what is euphemistically called a rubber bullet, causing permanent damage.  Today The Guardian reports:
12:57pm: Some updates from Phoebe Greenwood at Qalandiya:  “A young protester looks pretty seriously injured, having been shot in the lower back with a rubber bullet which seems to have been fired be [sic] Israeli soldiers in sniper position on a rooftop. He has been bundled into a Red Crescent ambulance.”  http://www.guardian.co.uk/world/middle-east-live/2012/mar/30/syria-israel-land-day-palestinian-territories?newsfeed=true
Am I surprised that the events that happened in my novel are actually happening on the ground?  No more than you would be if you wrote about the tragedy of a tornado hitting a small town, and later read about a remarkably similar incident.  The difference is that this tragedy is caused by acts of men, not forces of nature.  Men who seem to have learned very little through the centuries of civilization.  Tomorrow thousands will mourn the fallen, and for years to come mothers will grieve for their lost sons and daughters, and many more tears will be shed over maimed and broken survivors.
Reading the posts of the reporters for The Guardian as they come over the internet minute by minute describing what is happening, my heart aches for their pain.  Sometime I think I should be there doing my part, but the rest of me realizes that the best I can do now is use my words to continue the fight.
Al Jazeera has a photo gallery of pictures http://aljazeera.smartgalleries.net/gallery/1333113567642?image_id=00Gfaay3WLc1u including a woman trying to protect her cart of bananas from mounted soldiers.

This 33 second video in Kalandia shows water cannon, tear gas, and sound grenades being used against protesters and efforts by Red Crescent ambulances to reach the wounded 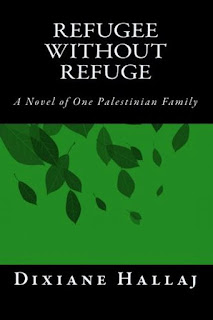 Art and life run parallel as the Land Day Demonstrations in Kalandia today reflect those described in Refugee Without Refuge.